The commonality in the discoveries of quantum physics of the likes of Max Planck, and the ancient teachings of Buddhism are explored in this solo piece. Presented in character monologue, Alexandra David Néel is able to address us here in 2018, via the fruits of spiritual practice, an address that is essentially a treatise of the nature of reality, the limitations of linear time, and the covergence of science and spirituality. She was a French explorer, spiritualist, Buddhist, anarchist and writer. Writer and performer Mariane Zahar takes on the role, weaving together both the reflections and story of Néel. It is intense acting, direct, charismatic and evokes that time well.
What we have here is eighty minutes of finely crafted and acted monologue that, from the first moment of even deciding to see the show, invites your active attention as a free and consistent act of will. The show itself examines and describes the quality of that attention, looking at meditation and the limits of knowledge and experience when we confine ourselves to a limited three-dimensional existence. There is, according to our host, life and far more essential experience beyond those confines, a realm in which love has a reality more telling and tangible than our daily, earthly intellectual cleverness. This may seem strange to you but the performer attempts to address you on more than one level, to those levels of reality beyond the material here and now. Some audience members were ready and willing to take on that role of attention or at least to suspend their disbelief; others drifted off and away from it. That’s going to be inevitable. Don’t expect the performer to do all of the work for you as she narrates her story in character but also offers an alternative take on reality – a reality dogmatically loved by current materialistic science. Though this is a monologue from start to finish, it also has a quality of urgency one minute, and gentle patience the next.
This is daring work, because it takes risks at the Fringe. It explores ideas about the universe that are not accepted nor even well known by most of western civillisation, ideas to be found in the more aloof centres of the world, such as those guarding the ancient Buddhist wisdom in Tibet, a place that, in 1916 was banned to a western explorer. The show is performed in an intimate space, is fairly but deliberately static in how it is presented (with episodes of movement and evocative sound) . It is here for the first time in an English-language version from a French original .
(You can buy the book after the performance if you want).
Challenging, competently performed, boundary-breaking in terms of its publicly performed content, go and see DNA if you want to experience one person’s exploration into how science and spirituality speak the same higher language using different words and thoughts. Ultimately both meditation and higher ancient wisdom refer to a practice. The same is true for quantum physics. It becomes about the work – how we, the world and the universe work. In an intriguing way, this show is also a kind of practice. You won’t enjoy or ‘get’ it if you just sit there and expect to be entertained. You may need to lean into it, or even enjoy parts of it just washing over the more superficial you. But it certainly offers some unique material at this year’s Fringe. And it is unashamed at its simple staging, dense content, and not always easy to grasp ideas. You may, like Alexandra David-Néel, have to go on a journey you have never been on before.

The Vibration Of Love Resonates On Stage

Alexandra David Néel, first a opera singer, then an explorer of Tibet and Asia, journalist and writer, died a centenary on 8 September 1969. First woman of European origin to stay in Lhasa in Tibet, she learned Sanskrit and ancient Tibetan.
She is the one who imported Buddhism into Europe.
Marianne Zahar has chosen to represent her in a show that is far from indifferent.
By means of a clever and instructive text that blends spirituality and science, she reveals some of the secrets of this great lady who has contributed to the liberation of woman.
So we enter on one side into an explanation of the world of quantum physics with serious characters like Max Planck and Albert Einstein. And of the other in the spheres of deep meditation where lies the secret of abandoning all imaginative thought and the seeds that generate them. Marianne Zahar who skillfully plays with her voice and body guides us towards the path of absolute love without the existence of good or evil. The vibration of love resonates on stage, and you are deeply touched. This actress felt this creation as a necessity, a need. I just felt as if I had listened to the deepest part of myself, looking for an answer, or at least an opening.
And it can be said that this search for an inner quest is contagious.
We only want to immerse ourselves in the mysteries of Alexandra David Neel's thought in order to better enter ourselves...

Half Thinker Half Chamane

Is David-Néel Alexandra, as her initials invite us, part of the DNA of our time?
It is, in any case, Mariane Zahar's opinion that we know as an actress but not as an author, before she wrote this show so peculiar and so contrary to intellectual fashions.
Alexandra David-Néel (1868-1969) was a great French orientalist, but not only a woman of thoughts. She travelled a lot, showed herself to be the equal of men, and even someone who was superior to them, in a time when the male sex possessed and kept all the powers.
A legendary woman of legends, a curling adventurer, she was in dialogue with the great Buddhist thinkers and was the first European to enter, in Tibet, the city of Lhasa, which was forbidden to female visitors.
Mariane Zahar gives her the floor: the occidental, crazy of the Orient, tells and makes connections between Buddhist theories and the scientific thoughts of Einstein and Max Planck. Don't Buddhists have a vision of the universe that is very close to the discoveries of quantum theory? Thus spirituality and research meet. What can be questioned in Mariane Zahar's excellent show is the bias of the conference. The figure of Alexandra David-Néel, as reinvented, addresses the audience to convince them and invite them to join her system of thought. We would have preferred, perhaps, a character who expresses herself in her loneliness, without pedagogy, without militancy, in a twirl out of time. But Mariane Zahar knows how to give the heroine an intense presence, a complexity that combines the character of a daily yet exceptional woman, the audacity of an adventurous thought and the fulgurance of a shaman. First sitting in a suit, the actress moves surprisingly from pensive immobility to passionate mobility. Such a moment, which could and perhaps will be discussed by philosophers of all kinds, aims to be a breach in the materialism that surrounds or conditions us. Mariane Zahar's reaction has style, for her text is as strong as a stone thrown against certainties and, thanks to her interpretation, takes on a beautiful theatrical form.

An Explorer Of Life

What would an explorer of the early 20th century have to tell us today?
Based on an in-depth study of the texts of the great Alexandra David Neel, the DNA show is a journey through time and space, at the crossroads of science and spirituality. The adventurous life of this extraordinary woman, who died at 101 years of age, was marked by her exploration of Tibet and Asia. Two cultures that fascinated her with their spiritual richness, broadening her passion for travel to her discovery of the inner journey.
She dedicated her life to this thirst for understanding religious and scientific dogmas.
Under her words, quantum physics becomes philosophy, skillfully contextualized in our daily lives." Matter is densified energy. Emptiness is form, and form is emptiness; movement is the form of objects," she says. Lao Tseu or Einstein might as well have said those words...
What if the theses of the greatest scientific thinkers joined the ancient Buddhist wisdom? Are scientific truths in us, just like spiritual responses? Would meditation have the power to let us see them? Among his questions, the character also invites us to reflect on the evolution of our civilization and the idea of progress." What have we done with our findings?" she's questioning us. DNA offers you the opportunity to rediscover the matter and energy that make up your life, just like everything around us.
This monologue, wonderfully carried by actress Mariane Zahar, invites us to reflect deeply on our time and our lives.

What a beautiful theatre we discover inside! But also what a wonderful show!
That evening, a creation by its author and performer was scheduled:
Mariane Zahar,"DNA Alexandra David-Néel".
Madame Néel was our neighbour for the last part of her life, since she died in Dignes at the age of 101. Curious to see how this immense explorer was going to be presented, we were there and it was an overwhelming surprise awaiting us!
We would never have imagined being swept into such extreme universes and finally immersed so close to ourselves. While we thought we were attending a traditional show about the life of this great character, the actress by her play, on a text skillfully put us outside this illusory world in which we believe we live to reveal that the only reality is love.
Just like us, the spectators were moved and different.

You may, like Alexandra David-Néel,
have to go on a journey you have never been on before.
Published August 13, 2018 by Paul Levy
Fringereview 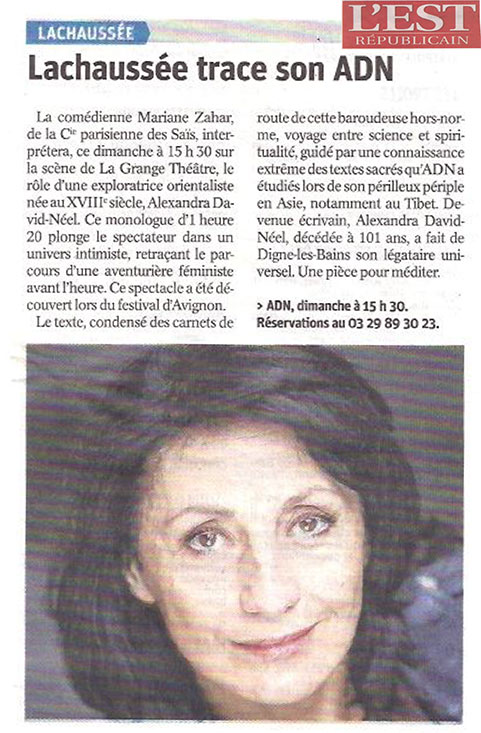 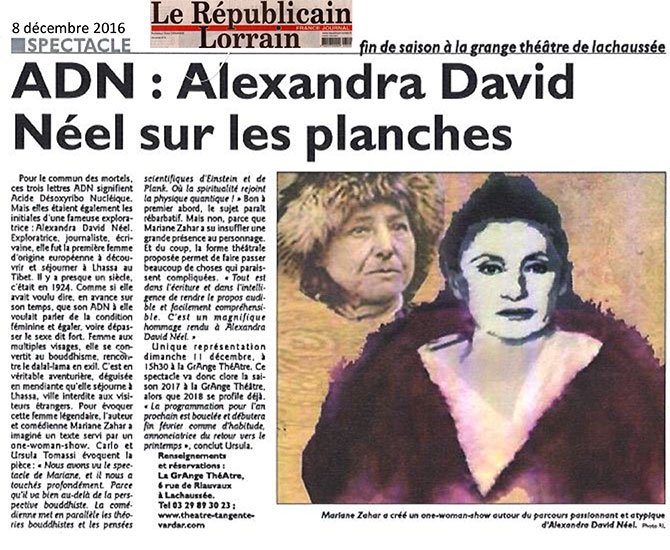